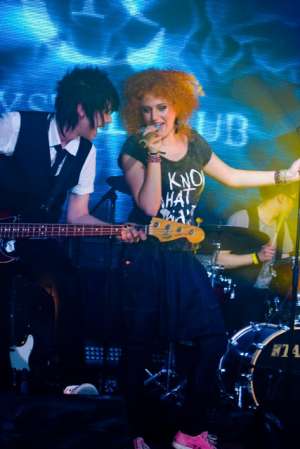 Состав: 1
Гонорар (от): по запросу
Написать владельцу арт профиля
Поделиться |
There is a hot new star rising on the pop-rock scene, and it’s Agnia, recently signed with the Finnish production company Amber Production, featuring world-class producers Kim Kuusi, Kari Hynninen, Kare Hellen and others. The musical producer for her project is well-known Finnish rock musician and composer, Samuli Laiho, who has experience working with some of the most popular Finnish rock bands.
Agnia performs a hot mix of high-end rock charged with the energy and sincerity of a young singer, and she’ll soon have listeners throughout Finland and the Baltics full of that fine summer mood.
Working with Amber Production, Agnia has just recorded her first CD with the two hit singles Hello Hello (S. Laiho / M. Laiho) and Heart is Broken (S. Laiho / M. Laiho). In June 2009 a hot summer video of Hello Hello was released on the Internet and has been exciting listeners around the world. The video will be promoted on music television channels in Finland, Latvia and the rest of the Baltic States, and soon her songs will be playing on radio stations throughout the Baltic region.
Agnia’s full-length album Never November was released in Autumn 2009. The album’s impeccable collection of songs tells the true story of a young girl’s first love. Each phase of her emotional journey has its song, and altogether the 11 pieces make up a complete listening experience, a real piece of musical art where every note and every word count. The album is a unique blend of good music, sincere lyrics and the pure voice of a young woman singer listening to the beat of her heart.
Her name is Agnia, and the hits of this rising pop-rock star will soon be finding their fans all over Europe.

During the concert in the popular Crystal Club Automatic Eye will perform their new compositions from the recently released album «ZEN» and also will introduce the young singer Agnia performing several songs from her debut album «Never November» together with her.
The young voice and sincere manner of Agnia combined with strong positive energy of the Finnish musicians will make a real «emotional explosion» in Riga!

Automatic Eye
«Being in contradiction with the most typical stereotype of Finnish musicians, Automatic Eye avoids depressive emotions and proposes only positive energy waves to the public» (Free! Magazine). The Automatic Eye’s musicians say that they are probably the happiest group in the World.